A Naga 'battle axe' from Arunachal Pradesh, India @ the Ethnographic Collections of the Department of Anthropology at UCL

Figure 1. One side of the axe (dao) showing the hair secured through holes into the handle.

Figure 2. The reverse side of the axe (dao).

The object (cat. no. A.0042) is described on the label as a 'Battle axe' and as being  'SE Asia. Nagas Wellcome Trust' and the place as 'India/Arunachal Pradesh'. It was acquired from the Trust in 1954 without documentation. In other collections similar artefacts are called chopper, hatchet, dao or knife. The terminology is significant as they are both weapon and tool. Dao is commonly used in ethnographic studies.

Figure 4. Detail image showing the red and black cane work on the haft and the metal ring with rivets.

The dao comprises a forged single edged iron blade hammered into an ornamented haft. The entire length is 772 mm. The haft (handle) is bamboo and coated in a dark resin. It is wrapped around by two bands of woven plant fibre, one dyed red probably from a plant in the wider madder family Rubia sikkimensis (Hutton 1921, 51). The second band has an alternative weave which is almost a 'herringbone' pattern. The most extravagant ornamentation is comprised of rows of bunched hair secured into neatly drilled holes. The hair is of two sorts: one dark, the second pale straw coloured and dyed with bands of red. Typically the hair is identified as goat or occasionally human. This example is as yet unconfirmed.

The dao was used exclusively by men and was an indispensable article throughout an entire life with no distinction made between a war dao or one for everyday use. Naga material culture is extensively represented in UK collections. The word 'Naga' was first applied to various peoples with different cultures and languages who had seemingly more differences than similarities. They defined themselves by reference to family, village or clan. Yet following the end of colonial rule 'Naga' has been used as a term to define nationhood and seek independence from India. The British used the cultural material as a way of classifying groups within the larger designation of Naga (West 2011, 182). Tribal names are often used as a prefix to 'Naga'. In this way it can be said that the blade shape and decoration are more typically Sema Naga and the other ornamentation Konyak Naga as in figure 5. 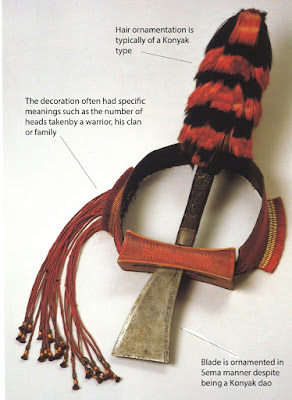 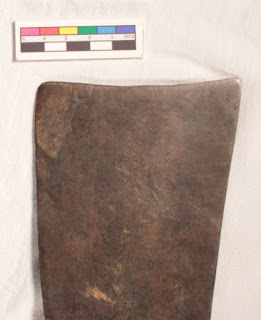 Figure 6. The blade with forged repair 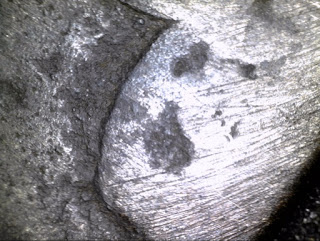 The dao is structurally sound and apparently complete. The blade and riveted ring show considerable signs of use wear. The cane work and hair are in a stable condition. Under magnification damage to the hair is visible. The dao is safe for display and loan. The hair is vulnerable and care should be taken when handling. 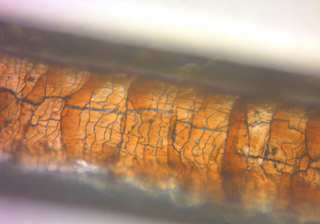 Figure 8. Detail image of a hair at taken with Leica DM LP at 40 x magnification showing the scale pattern of the hair and a dark line of damage running down the hair. Possibly the acetone used in taking the cast has stripped the dye from the hair.

This post refers to coursework done for ARCLG142 (2016-17), one of the core courses of the UCL MA  Principles of Conservation. As part of their assessed work for this course, students were asked to investigate objects from the UCL Ethnography Collections at the UCL Department of Anthropology. Here they present a summary of their main conclusions. We hope you enjoy our work! Comments are most welcome.
Posted by Unknown

Email ThisBlogThis!Share to TwitterShare to FacebookShare to Pinterest
Labels: ARCLG142 2016-17