Futher to Renata's post on our field work at Olduvai, here is a bit more detail on the project and the conservation approaches we've been trying.

Olduvai Gorge is a pretty unique place, internationally famous for Mary and Louis Leakey's discoveries of early humans, it was the first site for the discovery of the earliest stone tool culture, the Oldowan. It was also one of the first sites in Africa where the subsequent culture, the Acheulean, was discovered and is where the traditional view of the Oldowan/ Acheulean transition was established.

OGAP, The Olduvai Geochronology and Archaeology Project, brings together researchers from various disciplines from UCL, the Universities of Wisconsin, Indiana, Colorado State and Dar es Salaam as well as collaborators from the University of Erlangen-Nürnberg and University of Liverpool to interrogate the traditional model of technological change from between the Oldowan and Acheulean. You can read more about the project on its website: www.olduvai-gorge.org.

2013 was the first year UCL conservators have been involved in OGAP’s field work.

The challenges presented by the finds included cracking, excavation scars, delamination and breaks caused by the inherent instability of the fossils and lavas, massive concretions or sediments attached to both fossils and lithics and issues relating to reconstruction or consolidation carried out on site.

We were very fortunate to collaborate with Dan Mainoya, a conservator and curator at the Natural History Museum in Arusha, Tanzania, and benefited from his long experience of working on material from Olduvai.


The approaches developed focused on trialling stable, re-treatable adhesives and consolidants which would perform effectively in the challenging conditions of OGAP’s trenches but allow further treatment and refinement back in the controlled environment of the lab. We also tried some new methods of matrix removal, including a mobile air abrasive unit and weak acid gels.


Besides the opportunity to treat some stunning fossils and lithics from one of the most iconic archaeological sites in the world, we also had the privilege of meeting and working with many of the local Maasai people and returned to London with a lot of incredible beadwork jewellery!

With grateful thanks to the York Foundation for Conservation and Craftsmanship, which generously supported Rebecca's work at Olduvai www.conservationyork.org.uk

Conservators Rebecca Bennett and Renata Peters are working with OGAP (Olduvai Geochronology and Archaoelogy Project) in their 2013 excavations at Olduvai Gorge, northern Tanzania.

This is the site where the traditional view of the Oldowan (earliest human culture) to Acheulean transition was established. It is famous for discoveries of fossils of early humans, animals and magnificent stone tools.

To know more about Olduvai take a look at 'The Origins of the Acheulean at Olduvai Gorge (Tanzania): A New Paleoanthropological Project in East Africa' by Ignacio de la Torre et al. You can access the article here


This is the first time OGAP has conservators in the project.  Things are definitely looking brighter for the excavated material! We will post more details about the conservation work here soon, so watch this space.


Posted by Conversations on conservation of cultural heritage 1 comment:

Posted on behalf of Flavia Ravaioli:

Please take part in a brief survey on the use of storage materials. It should take from 6 to 10 minutes to complete.
http://www.surveymonkey.com/s/LLTZTRB

My name is Flavia Ravaioli and I am studying towards an MSc in Conservation for Archaeology and Museums at the Institute of Archaeology, University College London. You can view my personal profile here: http://www.fitzmuseum.cam.ac.uk/dept/conservation/staff/fr306.html

The aim of this survey is to collect information on how heritage practitioners choose storage materials while carrying out fieldwork. I’m primarily interested in how the choice is made in contexts in which "conservation grade" materials are not readily available. These contexts may include: archaeological sites; heritage sites or museums located in remote or poorly connected areas; heritage sites or museums in low income countries.
Please only answer this survey if you have experience of working in similar contexts.

The information gathered will contribute to a dissertation on the use of sustainable techniques and locally produced materials in conservation. The data will also be disseminated online on this page: http://uclconversationsonconservation.blogspot.co.uk

You must be aged over 18 to participate. By clicking on the “next” button at the bottom of this page, you are indicating that you are over 18, and you are consenting to participate in this survey. If you wish to withdraw at any stage, simply close the browser.

For comments, questions or more details about this survey please contact:
flavia.ravaioli.10@ucl.ac.uk

Thank you for contributing to my research, it is greatly appreciated!
Posted by Renata Peters No comments:

Current MSc in Conservation for Archaeology and Museum student Davina Kuh Jakobi is doing a summer internship in archaeological conservation, on site at Kaman-Kalehöyük, located in the province of Kırşehir, Turkey (about 100 km south of Ankara) with the Japanese Institute for Anatolian Archaeology. The site is located on a mound with the ancient Silk Road passing adjacent to the south. It has been inhabited by many groups that have occupied central ancient Anatolia starting around the third millennium BCE, during the Early Bronze Age. 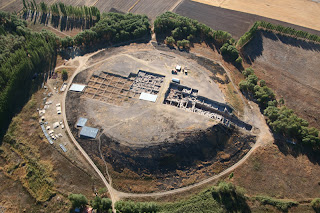 Image from the Kaman-Kalehöyük Archaeological Museum website, which discusses chronology of the site and results of excavation.

The conservation team there consists of the director of conservation, the field conservator, the preventative conservator, and two interns. Together, they are responsible for the conservation and preservation of the excavated finds, which primarily include many small copper alloy and iron objects, but also include lead, glass, stone, bone, obsidian, and ceramics. They also have the opportunity to collaborate with other researchers on site, such as archaeobotanists, zooarchaeologists, osteologists, and archaeological analytical scientists. 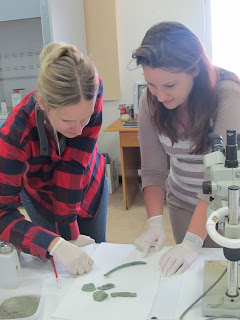 Field conservator, Kate Wight and Cheryl Anderson, a Ph.D. student in anthropology at the University of Nevada Los Vegas, examine a bone that has become green from associated copper alloy objects.

Occasionally, they are called out to the field to lift fragile finds; so far this season, they have lifted two fragile iron artefacts. Additionally, Davina is working on a research project to formulate a methodology for the cleaning and unrolling of lead scrolls. 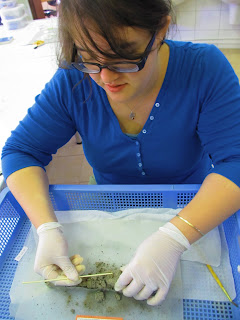 Davina cleans one of the iron objects that has been lifted this season.

They've gotten their conservation blog up and running, which gives a bit of insight into some of the artefacts and projects that they are involved in, so definitely check it out!
Posted by dreamerdavina No comments: