I originally found the message about this specific conservation project on a Dutch news site, of all places! They were less than flattering of the project, as the headline of the Dutch article 'Britten verklaren Beatles-zebrapad heilig' translates to 'British declare Beatles-crossing holy'.

Two English sites which figure the same message are here...

"The London crosswalk pictured on the cover of the Abbey Road album by the Beatles has been designated as a site of national importance by the British government.

The heritage designation, approved Wednesday, means the crossing can only be altered with the approval of the local authorities, who must consider the historic significance of the site before approving any changes."

I can clearly spot some conservation problems here! First of all, this crossing is still in use! It’s going to wear down if people keep walking on it, and if cars keep crossing it. And if you compare the first image to the second image, you can see that it’s been quite damaged since the Beatles first crossed it (and quite altered too...). 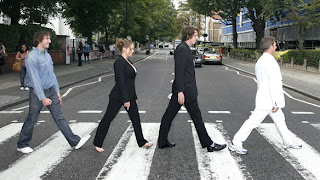 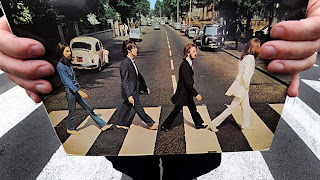 Clearly this site can’t be conserved in a 'ordinary manner', by trying to prevent damage from occurring to the site through either covering it or limiting the public’s access to the site. So how are they going to conserve this site? Surely this crossing must be restored again and again if you want to keep it visible and recognizable as a crossing!

And what is the UK trying to conserve here anyway? What is the historic significance of this site? According to the Dutch article the crossing is not even in the original location anymore because it has been relocated a few meters about 30 years ago. So is it the intangible aspect? The fact that once upon a time there used to be a crossing in the vicinity of the present-day crossing where the Beatles once walked on?
Posted by Iris 3 comments:

Do you know how to choose your gloves?

If you are not sure you should look at the new 0 Gram leaflets, published by the U.S. National Park Service Museum Management Program. The new items also include basic guidelines on how to identify plastics.


Download the leaflets from http://www.nps.gov/history/museum/publications/conserveogram/cons_toc.html
Latest leaflets:
How To Select Gloves: An Overview For Collections Staff
Care and Identification of Objects Made from Plastic
Preparing and Storing Geological Drill Cores
Digital Storage Media
Posted by Conversations on conservation of cultural heritage 2 comments:

Apparently the use of telephone boxes has halved in the last two years.
It looks like their days are numbered unless the plan of transforming them into ATMs goes ahead.
Although I am not a big user I quite like having them around - somehow I think England would look less English without them. But perhaps I am just nostalgic!


Details: THE INDEPENDENT, and see a photo of an ATM on the METRO

Posted by Conversations on conservation of cultural heritage No comments:

New grant for the conservation of Auschwitz-Birkenau

Posted by Conversations on conservation of cultural heritage 3 comments:

Email ThisBlogThis!Share to TwitterShare to FacebookShare to Pinterest
Labels: Sites of sorrowful memory

"Liverpool’s National Conservation Centre will close to visitors as a result of government cuts. The city centre venue will close at 5pm on Friday 17 December.

National Museums Liverpool, which is funded by central government, received a 15% cut to its budget in October. This was on top of a 3.5% earlier this year. Managers have been working to maintain its world class venues and safeguard jobs as much as possible.

After reviewing costs of managing all our buildings, it is no longer possible to afford to keep the National Conservation Centre open as a visitor attraction."

Peter, Cultural Policy Advisor, Canterbury City Council (MA Member), says:
"Such a shame, the National Conservation Centre was one of those truly original museums, that not only did (does) a brilliant job, but also gives visitors a great insight into the long term objectives of museums, and specifically collections managers and conservationists - the usually unsung heroes of the museum world..."

Any thoughts/comments?
Posted by Iris 2 comments:

Email ThisBlogThis!Share to TwitterShare to FacebookShare to Pinterest
Labels: Public face of conservation

Here is the REVERSE GRAFFITI MOVEMENT !

Do you know the REVERSE GRAFFITI MOVEMENT?

Take a look at the following, very interesting:
http://www.youtube.com/watch?v=5lX-2sP0JFw&feature=player_embedded

Apparently reversing graffiti is very popular. This is done as an "art statement". Have you seen any?

Here is another story of someone who worked with a conservator to reverse various layers of graffiti:
http://c-monster.net/blog1/2010/10/10/historical-graffiti/
Posted by Conversations on conservation of cultural heritage 1 comment:

Email ThisBlogThis!Share to TwitterShare to FacebookShare to Pinterest
Labels: Graffiti

By SIMON ROMERO and ANDREA ZARATE
Published by the NYT on December 11, 2010

"Peru is astonishingly rich in archaeological and paleontological sites, so much so that the issue is part of a delicate political debate here. The loss of national treasures to collectors from abroad has set off concerns about sovereignty, perhaps best exemplified by the feud between Peru and Yale University over Inca artifacts taken by Hiram Bingham, the American explorer typically credited with revealing the lost city of Machu Picchu to the outside world a century ago."...
Posted by Renata Peters No comments:

Email ThisBlogThis!Share to TwitterShare to FacebookShare to Pinterest
Labels: Looting and illicit trading

Bones of contention (from the NYT)

Article about the impact of the recent regulations issued by Department of the Interior for the disposition of ancient American Indian remains and funerary objects that cannot be affiliated with modern tribes. The author argues that the new regulation will be detrimental to sources of knowledge about North American history ...

"The new regulations help carry out the 20-year-old Native American Graves Protection and Repatriation Act, a law that was devised by tribes, scientists and museum officials. It was a compromise between the tribes’ sensitivity to having the remains of their ancestors excavated and analyzed and the archaeologists’ desire to learn what bones can reveal about ancient peoples’ diet, health, migration patterns, marriage practices and so on."

Read more on the NYT site (link is above)
Posted by Renata Peters 6 comments:

http://www.mae.usp.br/revista%20do%20mae/textos/3_GedleyBelchiorBraga.pdf
My first contribution for this blog is the link of my article [the full text is available in Portuguese, only, but the abstract can help a little - if someone wants to translate to English it would be very good] :
BRAGA, G.B. “Brandi Theory of Restoration”: an approach to artistic, archaeological and ethnographic objects. Rev. do Museu de Arqueologia e Etnologia, São Paulo, 15-16: 337-346, 2005-2006.
ABSTRACT: The Brandi restoration theory was written based on two fundamental principles applied specifically to the work of art, an object that is submitted on an exception critical judgment point of view among all the others objects produced by the human being. The contemporary art put in doubt all the possibilities of definition about what is a work of art. This article, beyond the discussion about the contemporary artistic context, tries to verify the possibility of applying this theory to the use of the word “restoration” for archaeological and ethnographic objects within the museological context, in the same perspective of the work of art.
UNITERMOS: Conservation and restoration of archaeological and ethnographic objects – Theory of restoration – Contemporary art, archaeology and ethnology
Posted by Gedley Belchior Braga No comments:


A number of graffiti appeared around the UCL campus this week. What do you think of this action?


Is this mere vandalism and mindless destruction of property?
Or is it one of the ways freedom of expression materializes?
Is the graffiti damaging to the public face of UCL or a testimony to UCL’s lively and democratic environment?
Is the graffiti disfiguring UCL campus or just another layer of its biography?

What do you think Jeremy Bentham would say?


If you look at the graffiti as damage, how should we respond?
Should we support those who want to clean the graffiti off?
Should we argue the interventions will disappear on their own?
Should we consult different groups of stakeholders such as UCL staff and students before taking any action?

Posted by Conversations on conservation of cultural heritage 20 comments:

Email ThisBlogThis!Share to TwitterShare to FacebookShare to Pinterest
Labels: Graffiti