Getting ready to go to Olduvai Gorge

It’s that time of the year, when we start hoarding conservation materials, packing supplies, and getting ready to join friends and colleagues in Olduvai Gorge.

The UCL conservation team working with OGAP in Olduvai Gorge will be mighty this year! UCL conservation students Abby Duckor, Anna Funke & Jan Cutajar will be working with Eli Diaz and Renata Peters. We are looking forward to joining our colleague Dan Mainoya in Arusha and possibly have some Tanzanian conservation apprentices in the team as well.


Our main activities this year will include:
-Development of new approaches to lifting, consolidation and stabilization of fossils and lithics
-Removal of matrices
-Identification of available local resources
-Testing and use of local materials
-Building capacities among Tanzanian colleagues and students
-Engagement with local groups through the practice of conservation
-Evaluation of approaches to increase access to the collections

But we are also hoping to continue our Maasai beading workshop and possibly some basketry!

Watch this space, we will be blogging from our lab in the Leakey Camp!
Posted by Renata Peters No comments:

By Anna Funke
This post is to introduce you to a fascinating project that three MSc Conservation students (myself, Abby Duckor and Jan D. Cutajar) will be involved with this summer.
The three of us, also known as the GTCT (Greatest Tanzania Conservation Team) will be going to Olduvai Gorge in – you guessed it - Tanzania this summer! We will be in pursuit of some hand-fast evidence about the lives of early man and woman. This famous site is right at the heart of the theory that humanity’s origins are to be found in East Africa.

The archaeological research at Olduvai focuses on the transition between the Oldowan and the Acheulean. Both these groups are steps in the line of the human biological as well as technical evolution. The archaeologists on site will therefore be looking both for human remains that can give some insight into the biological stages of our development, as well as for ancient stone tools that can shed some light on our early technical developments. The finds from Olduvai Gorge go back as far as 1.7 million years! 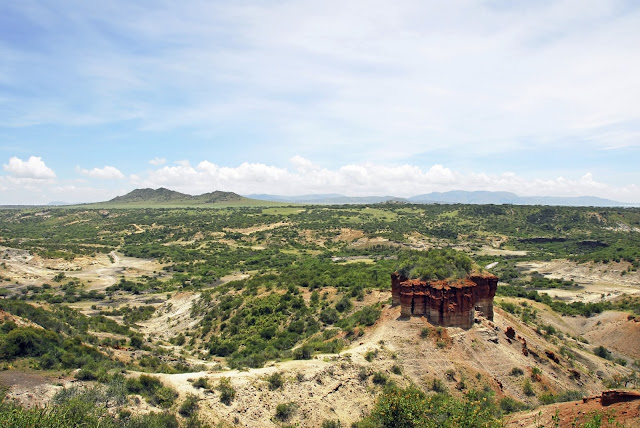 Our contribution to these grand questions will be to try to stabilise these fragile finds so that they can safely be studied. We will also try our hands at excavation by helping out with the lifting of particularly fragile finds. 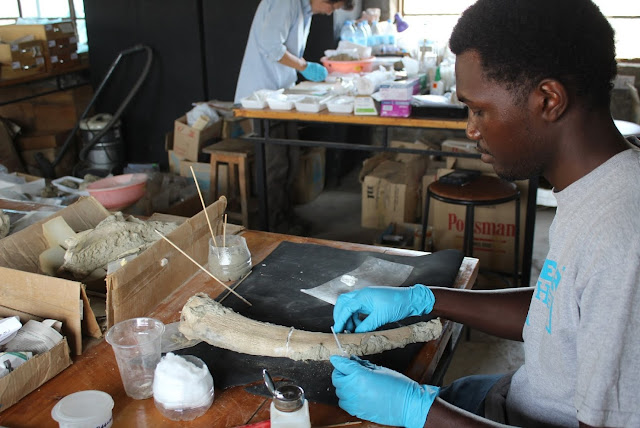 A fragile find being worked on in the Laetoli Lab by Ephraim Lucas Tarmo, one of the Tanzanian conservation apprentices in the 2014 season. Photo courtesy of OGAP.

We are now in the final weeks of preparations before the departure of GTCT in early July! We are getting our vaccinations and gathering our tents, travel showers, and tool kits. We can’t wait to jump in and we hope you will stay tuned for updates during the excavation! If you would like us to send you a postcard, we will happily do so in return for a small contribution to our travel fund. We are so close to going but we still need to raise the last of our balance to make this trip a success! You can help by contributing here or by spreading the word about our project. Thank you for any help you can give!
Find out more about the conservation at Olduvai Gorge here.

Posted by Unknown No comments:

The complexity of making mounts

As part of the course ARCLG139 Skills for Conservation Management (UCL MA Principles of Conservation) last April, I carried out a mounts project with the objective of learning how to create safe mounts while taking into account the space and resources of the collection. Although it was a challenging project, I very much enjoyed the process, especially when thinking that my work might help to expand the lifespan of those unique artefacts.
The project consisted of creating suitable mounts for 22 objects of the Ethnographic collection in the Material Culture Room at the Department of Anthropology (UCL). The objects were stacked one above the other and were protected by acid free tissue. Because of the organic nature of the artefacts and the lack of appropriate mounts, they were rapidly deteriorating. What a shame, right? Especially since these objects are very interesting from  ethnographic and aesthetic perspectives. 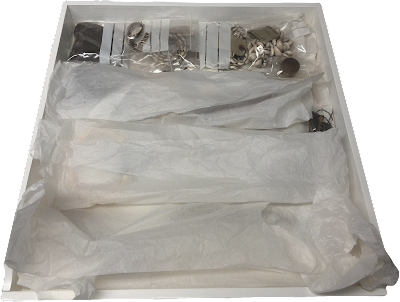 Fig. 1. Drawer 4H: Acid free tissue and plastic bags were the only protection the objects had (before project).

The aims of the project were discussed with Delphine Mercier, responsible for the care of the MCR collection. After my discussion with Delphine, the next step was to identify those limitations and needs.
Needs: 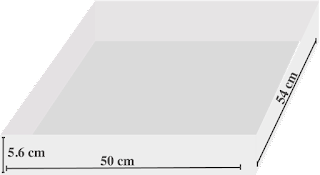 Fig. 2. Drawer 4H Dimensions
Due to the restrictions of space, the resulting proposal stated that two levels would be needed inside the drawer with the taller artefacts in a first level and the shorter in a second. Also, the objects that weighted the most were placed in the first level to avoid the weight of objects affecting each other.
Additionally, similar materials and other connections - for instance, provenance - were also taken into account, and whenever possible they were placed next each other. For example, artefacts J.0027, J.0028 and J.0111 A&B were placed close to each other because they have the same provenance – Papua New Guinea – and are made of similar materials. 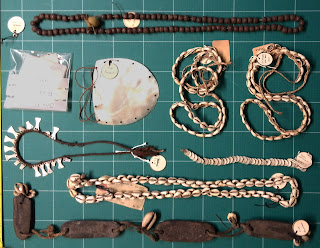 Fig. 4. Organisation plan of the second level in Drawer 4H placed over the first level (during project).

Although the original intention was to use plastazote and corex, corrugated board was also available. The space restrictions made the last material more suitable than corex. Moreover, corrugated board resistance made possible to make boxes for individual objects or small groups of objects. 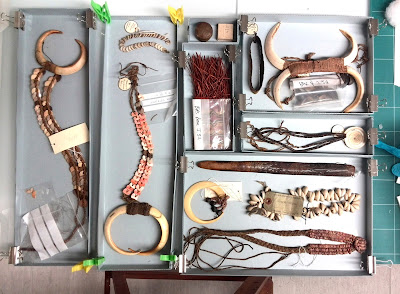 Fig. 8. Boxes and objects place in the First Level 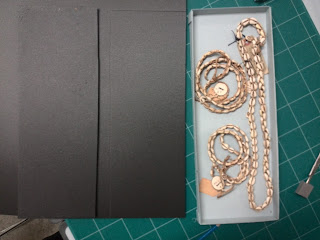 Fig. 9. Plastazote layers and box with objects J.0058 (on the right) and J.0073 (on the left: A&B).
In order to reduce the weight of the upper level on the lower level, small plastazote pillars were placed. To provide further security among levels, an extra layer of corrugated board was placed between them. The  boxes were cut and glued with a hot glue gun. 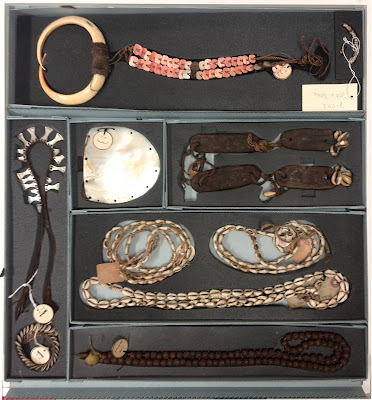 Fig. 11. Project result: second level (now with Plastazote cutouts) in Drawer 4H (after project).
The result fulfilled the objectives of the project, successfully improving their safety, access and visibility. The experience has been unique, and I have realised the creativity and dexterity needed to design mounts that usually need to meet several objectives. Moreover, almost any institutions have space and materials restrictions, which make the task even more challenging.

Now, I find myself looking first to the object and then inevitably to the mount. I deeply admire professionals working on the safe storage of collections. Thanks to their work those objects are still alive when someone finally decides to lay down their curious eyes on them.

Posted by Alicia No comments:

A big box for a fragile basket

As a student of the Skills for Conservation Management course (UCL MA Principles of Conservation), I was encouraged to choose between different conservation projects. One of them was building a mount for an object from the UCL Anthropology’s Material Culture Room, which houses part of the Ethnography collection. I considered other options, but creating a mount from scratch, for an object that needed it, seemed like a great conservation challenge.


I was assigned a Fijian loosely woven basket, object H.0051, which was in a very fragile condition, with its bottom damaged in several areas. It was also quite disfigured, and its weight laid mainly on the bottom, which was problematic given its condition. The basket was about 47.5 cm wide, 44 cm long, and 41.5 cm high.


Given the state of the object, I decided that the mount should meet the following requirements:
After talking with Delphine Mercier, Collection Manager of the Ethnography Collections, I decided that, due to the need for protection, the object should be housed in a box covered by a lid. The main material I used to build it was coroplast (polypropylene), which is appropriate, readily available and inexpensive. I joined it using cable ties. The cable ties were also useful to join two different coroplast sheets, as one seemed not to be big enough for such a big box. For the safety of the object, it would be placed on a tray, which would fit inside of the box. One of the walls of the box would come down, allowing the object to be taken from the box without being lifted or taken from the tray. The wall would be kept in place thanks to two ribbons.

The tray was made using coroplast, plastazote sheets and tyvek sausage-shaped cushions filled with polyester wadding. Three layers of plastazote were used as a base for the object, and to keep the cushions in place. They were glued together and to a coroplast base with hot glue. Two loops of cotton twill tape were added between the coroplast and the first plastazote layer, so the tray could be pulled out of the box. The other two layers were cut leaving a big hole in the middle, where the object and tyvek cushions would be placed.

The tyvek cushions were sewn with help of Renata Peters, and filled with polyester wadding. They were adapted to the shape of the basket, and placed between it and the plastazote.

Overall, the box seems like a good option to store the object, as it meets most of the previously stated requirements:


On the other hand, the tyvek doesn’t seem like the best option for this kind of material, as it sometimes gets caught in the basket fibres. However, as the intention was for the object not to be taken out of its mount in most cases, it was considered a valid choice for the time being.

Posted by Elina Rodríguez-Millán No comments: